Liger actress Ananya Pandey shared pictures with Ranbir Kapoor late on Tuesday evening and revealed that she has started shooting for her new project. After the pictures on Ranbir and Ananya appeared on social media, the round of speculations has also started.

Ranbir Kapoor and Alia Bhatt most awaited film Brahmastra:Part One has been released in theatres. His film is getting a lot of love and good response at the box office. In the mindset of all this, now Ranbir Kapoor has started shooting for his new project with Ananya Pandey. This picture has shared by Ananya Pandey on her social media handle about the start of the shooting of her new project. In these monochrome pictures, Ranbir and Ananya are seen flaunting their adorable smiles and during this time two are seen in ethnic dress. By sharing this picture of her, the actress described Ranbir as her new best friend. Sharing the picture, Ananya wrote, New day, new shoot and new friend. At the same time, after the picture of Ranbir Kapoor and Ananya Pandey surfaced on Social media, speculations have started and fans are eagerly waiting to know about their new project. However, no official information has been revealed about this new project.

On Ranbir Kapoor work front, he has big projects in hand, which include, Sanjeev Reddy Wang`s Animal and Luv Ranjan untitled film. In Animal Ranbir will be seen playing lead role opposite to national crush Rashmika Mandhana, while Luv will be seen romancing with actress Shraddha Kapoor in Ranjan film.

On the other hand, if we talk about Ananya Pandey work front, She will soon be seen in Kho Gye Hum Khan opposite Siddhant Chaturvedi and Gaurav Adarsh. The story of this film will be seen revolving around three youths living in Mumbai. Arjun Waten Singh is directing this film. 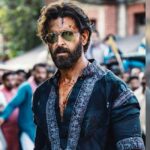 Hrithik Roshan Failed to impress the audience as Vedha
Next Article