Akshay Kumar is celebrating his 55th birthday today. He started his Bollywood career from movie ‘Harjai’ as a child actor. His officially debut film was ‘Saugandh’ which was released in 1991. In 1992 first part of Akshay`s  most popular film series ‘Khiladi’ got released. Akshay is known for his stunts, comedy and many experiments as an actor. He is known as Khiladi of Bollywood. Over the years he has done so many characters. Some of his famous characters are Raju(Hera Pheri), Vikram Rathore(Rowdy Rathore), Nitin Bankar(De Dana Dan), Sachin Tijkule(Khatta Meetha) etc. He has many up and downs in his career but never fails to entertain his fans.

Where any actor takes 2-3 years for a film to complete Akshay do so in 4-5 months. This consecutive working makes him different from others. Come let`s have a look on his some upcoming 4 movies. This is Hindi remake of Malyalam film ‘Driving License’ which was released in 2019. Akshay along with Eemran Hasmi, Dyana Panty and Nushrat Barucha will be seen in this film. This film is likely to be released next year on February 24. 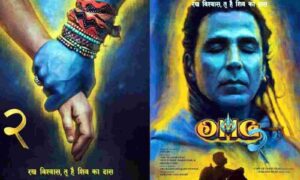 Akshay was seen as lord Krishna in the first part of this film and now he will be seen as lord Shiva in second part. Apart from Akshay Kumar, Pankaj Tripathi and Yami Gautam will also be seen in this film. The release date is still not confirmed.

This film is the Hindi remake of Tamil film which was released with same name starring Surya. Akshay will be seen as an Indian Air Force captain in this film. Radhika Maadan will be seen in opposite of Akshay Kumar for the first time on this film. This film can be released next year. Ram Setu: Problems for Akshay Kumar is not decreasing, Subramanyam Swami once again asked for the answer
Leave a comment Leave a comment