Mega Star Shah Rukh Khan also known as SRK will be staying in Chennai for one month for shooting the film Jawaan. Jawaan which was released on 2nd June 2023. Jawaan which starrer  Shah Rukh Khan, Vijay Sethupathi, Nayanthara, and  Sunil Grover. The film is directed by Atlee. The film completed the first phase of the shoot in Mumbai now the film is moving to Chennai. SRK made a comeback after 4 years, actor’s last film was ZERO which was a flop.  SRK already completed the shoot of “PATHAN”.

Vijay Sethupathi is playing a negative role in the Film JAWAN. The two massive successes of Vijay Sethupathi’s films are Vikram Veda and Vikram. After these two films, we have seen a significant rise in the stardom of Vijay Sethupathi. It has been said that actor Vijay Sethupathi increased his normal fees from 8-11 Crores to 15-21 Crores. Several media reports claimed that SRK and Atlee were keen on roping in Vijay Sethupathi after Rana Daggubati backed out of the film because of date issues due to his ill health.

Shah Rukh and Sethupathi have mutual respect for each other, and hence, when Shah Rukh himself offered Sethupathi this role in Jawan, he couldn’t refuse it. As Bollywood failed to make good content films and there is also a Cancel culture going on in Bollywood. The majority of the audience moved to PAn India for their preferred choice of film. 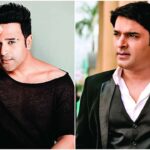 Krushana Abhishek walks out from The Kapil Sharma Show; he won`t be the part of the next season anymore
Leave a comment Leave a comment