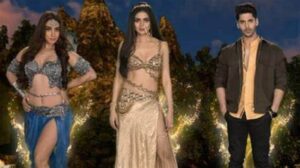 Tejasswi Prakash is presently seen playing the lead in fictional show Naagin 6.Ekta Kapoor is the producer of the show. And the show is one of the most popular show in television. Main stars in the shows are Tejasswi Prakash, Simba Nagpal, Mahek Chahal. The love story of Pratha and Virat is loved by the audience. Naagin 6 has always managed to rank in the top 10 on the TRP charts. The show has taken a leap in which the story of the twin daughters of Pratha has come to fore.

Tejasswi is right know the viral sensation on the internet all thanks to her fake accent. Before the leap the track that was going on made the audiences  left in splits seeing Pratha’s foreign returned avatar. As the new character shows that she have returned from London. The accent was exaggerated by Tejasswi. Due to this the audiences started criticizing her ‘Fake Accent’.

In a recent conversation the actress told that the criticism of her accent was misunderstood by the people .She said” I was not following any accent, it was not legitimate. I just wanted to make it really fun. As well if people find it funny, that’s great. When so many good things are being made ,everything is good, and it  doesn’t work out. My show is working even when everything that happens in it doesn’t make sense. You do it with perseverance and it sells”. Her accent has now became the talk of the town after her popular dialogue, where she talks about walking at odd hours to maintain her figure.

The accent went viral when Jhanvi Kapoor made reel on her accent and shared it in social media. After the reel goes viral a lot of celebrities did it and people are going bonkers. Tejasswi praised the young star saying that ,’I loved her dedication. She directed the video herself with a friend and i loved how she did it. She told after posting the video people also started making reel and it went viral.’Tejasswi Prakash is always in headlines for her relationship with Karan Kundra.