Kapil Sharma is one of the most loved and admired actor in Bollywood Industries. The actor-comedian had left everyone bursting into laughter as he made his ramp walk debut. He is all set to entertain the audience with his brand new series,The Kapil Sharma Show.He is now an internet sensation who is making immense noise with his classy look for the new season and kept the audience awaited for counting days.Kapil made his debut at Anu Ranjan’s BETI Fashion Show.He is often called the king of comedy in the country. The comedian entertained the audience with his funny catwalks.

Kapil sharma wore a black pant with golden prints on it and a black jacket. Sharma walked the ramp with full of energy  and confidence.He also imitated the professional models at the end. He turned showstopper for Anu ranjan’s fashion show.He is an inspiration for everyone who dreams of becoming a big artist in mumbai. We love the way he’s achieved success,don’t we? 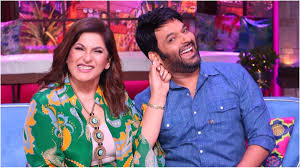 The Kapil Sharma show which is one of the most popular shows on telly screen. The famous show will be on air from Septemer 10.Krushna Abhishek will not be returning to the show. On wednesday, Sony tv shared a new video revealing the cast and the new characters of the upcoming season. The last season was aired in june and this year the new season was announced earlier this month.Kapil sharma will play the role of Kappu sharma.Sumona Chakravarty will play his wife Bindu.Chandan Prabhakar as Kappu’s friend and Kiku sharda as ‘mohalle ki dhoban’ named Gudiya.

Kapil introduced the New character Maski ,who is kappu’s friend chandan’s wife. Goli is kappu’s brother in law. Last week the teaser  of the show was released. Kapil wrote”Back with a new season”.The new season will make you laugh harder. Besides the show kapil will next seen in Nandita das film Zwigato.In the film he plays the role of a food delivery executive.

BOYCOTT BOLLYWOOD the real root of conflict
Next Article