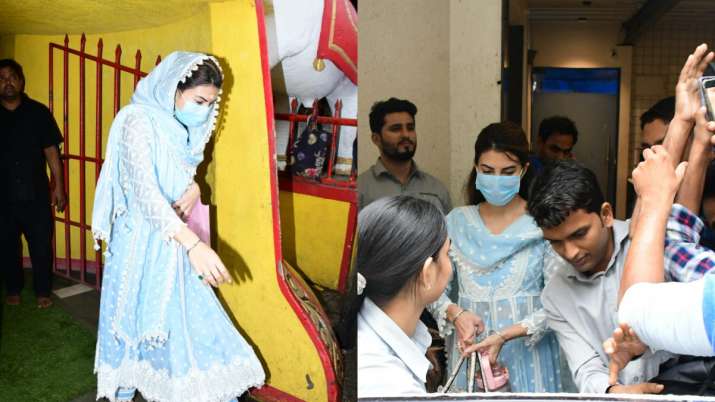 Actor Jacqueline Fernandez was recently seen in Mumbai on Monday for the first time. She named as an accused in the extortion case .The actress visited the Mukteshwar temple in Juhu. A charge sheet filed by the Enforcement Directorate to Jacqueline as she connected to conman Sukesh Chandrashekhar. She seen at the temple paying her respects. She wore a blue-colored Anarkali suit with a mask on her face. Then she walked out of the temple carrying a plastic bag in her hand. Photos and videos of the actress are broadly spread on social media.

The actress have visited the ED several times and also met Sukesh in jail. A charge sheet filed by ED has made the actress accused in the money laundering case against Sukesh Chandrasekhar. She accused by ED of worth Rs200 crore. She shared a note on social media that read ‘it’ all be ok’. After investigation it was cleared that both of them have links between them and suggesting the two were

Statement By the Lawyer

Prashant also adds that Jacqueline will take important steps to protect her dignity and liberty. She has been very cooperative during the investigation and he feels she is a victim of a larger conspiracy. It is believed she may not to be allow  travel outside the country. However it revealed that she has a lot of expensive cars, jewelry and gifts from the conman. She might move to Patiala court on Thursday, to get a copy of the charge sheet filed by ED.