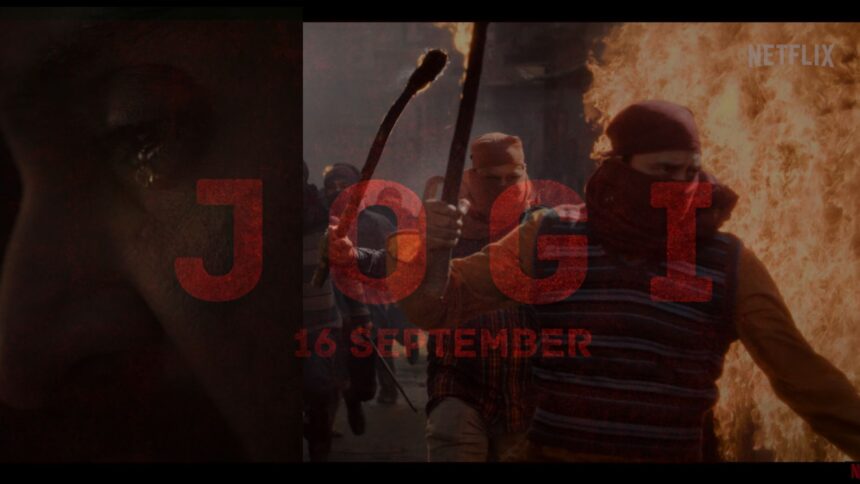 Diljit Dosanjh’s starrer movie ‘Jogi’ trailer is out now on youtube. The movie will release on Netflix next month on 16th of the September.

The movie is about the 1984 Sikh genocide and riots. Which happened in the first place because of the Indira Gandhi assassination. This movie is directed by ace director Ali Abbas Zafar. The same director who made movies like Tiger Zinda Hai, Sultan, Gunday, and Bharat, now working with the actor-singer-youth icon Diljit Dosanjh. The trailer opens up at a normal household, hurrying for work and casual life with one’s family. Three gunshots are heard and the whole narrative of the trailer changes. The dark sides of the riots are shown, people running with fire torches, incendiarism, killing, and beating of the community.

Heartbreaking dialogues from the characters such as, “Tu Sardar hai na, yahi teri galti hai” (you are from Sikh community, that is your only mistake). Dialogues like this are making sure by the second that this movie is going to be dark, unadulterated, and unfiltered on the OTT platform. The banning and censorship of the movie are less likely to be there because of its release on an OTT platform. The movie’s nature is sensitive and more on showing the truth than obeying the community guidelines.

“Ye sab parivar hai mera, mein insab ko chhod ke kahi nahi jana” (all of them are my family, I am not going anywhere leaving them alone) This dialogue gave the trailer a big twist. It changes the trailer’s direction from being the victim to being a survivor. As the Boycott Bollywood drama is going on among the netizens and trollers. Politicians, Central Board Of Film Censors cutting and objecting at the movie is now a common thing.

So fans and audience are happy to see the movie come out on an OTT platform. As the movie is likely to ban or objected. Though it will be interesting to watch how the people take the movie on sensitive days like these.