Brahmastra’s 1’st day early estimation collection reports are now coming in. Based on how much the movie has earned by the afternoon. Houseful shows till the evening, a gross estimate of day 1 is to be around 25-28 crores. Analysts all over the world, and experts now believe that even after adverse conditions like this Brahmastra is expecting to do well.

On accumulating all the information around the world, the occupancy of the theatres is said to be around 70 to 100%. In some cities, few theatres were completely full and some were almost.

Brahmastra: against all odds

After seeing almost all the housefuls, it is said that will the movie will at least open at 25crores on its first day and will do good in the following days. This is just a mere prediction, and time will tell how good the movie did.

It is no secret that the movie was facing some extreme boycott protests. The makers were afraid that the movie will share the same fate, as the other movies of this year. It is even more fearful when your movie is the most expensive one in the history of indian movies. Even after all the propaganda, Ranbir and Alibollywoodfriday.com/ranbir-kapoor-alia-bhatt-denied-to-enter-the-temple-3651a’s fan base did not care. Still went on to see their favorite couple in the movie. The movie takes place in the Astraverse. The story is about Astras who are on the planet. Among all the astras that are there, one of them is Agniastra, Ranbir Kapoor or Shiva wields it. Brahmastra is the strongest Astra of all. According to the legend, it’s into 3 pieces and the world will end when all three of it will come together.

Now why they are all fighting over it, the hidden stories are in the movie. According to the fans, the screen time was overwhelmed with Ranbir and Alia’s love arc. 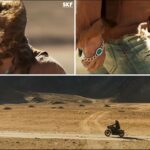