Bollywood King Shah Rukh Khan‘s eldest son Aryan Khan recently spotted at the Mumbai airport . He was coming back to his home after a short vacation . He was looking dapper in the casual look . As he is an Social Media influencer there is large number of fan following on his social media . Aryan always seen active in social media he shares pictures and videos .Till date he had not made his debut in the industry . The Star kid was in public attention for the drug case. After investigation it was clear that Aryan was not involved in that case and NCB has given a clear chit . 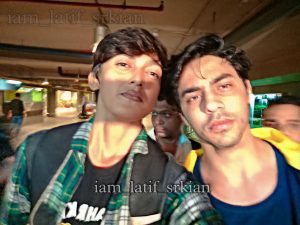 Recently when he arrived at the airport fans welcomed him with a warm gesture. Many photos and videos went viral . He was wearing a navy blue T-shirt which he completed with black cargo pants . He added an white sneakers to look dashing and a bright yellow jacket .One of his fan gave him a red rose which he took with a sweet gestures . Many other fans tried to click pictures with him some of them took selfies as well . The video which is crazy all over social media is one of the fan kissed Aryan Khan’s hand after taking selfies. Aryan also greet the fans with ‘adab ‘ which took fans heart . Everyone out there remembered SRK ‘salaam gesture’. People commented on the video and said, “Like father like son”. One fan also wrote, “National Crush of today”.

The hunk was seen in a recent photoshoot by Adidas where he had raised the temperature. SRK commented on the post,” Looking really good.. and as they say that whatever is silent in the father.. speaks in the son”. He also said, “By the way is that grey T-shirt mine?”. To which Aryan replied and said, “Your genes and t-shirt haha”. He will make his debut as a writer . He developed many ideas some of them are a web series and a film for Red Chillies Entertainment are the workfront he is currently working on . 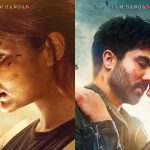