Netflix India shared a glimpse of Anushka Sharma’s forthcoming project Chakda Xpress which is based on the life of an Indian Women Cricketer Jhulan Goswami. In the BTS(Behind the scenes) video, we can see the actress in a new avatar which is of short hair. Fans already love this BTS video. Anushka also shared the video on her Instagram handle on which she wrote “Here’s a glimpse into the Chakda Xpress journey with our earnest director Prosit Roy.” with many hashtags. The film will be released on the OTT (over-the-top) platform Netflix. This is the first film she is doing after her first child was born (Vamika).

Chakda Express is a film based on the life of Indian Women Cricketer Jhulan Goswami. Come from a small village Chakda to make a way to the World Cup Finals. Cricketer Coming from Chakda town of West Bengal’s Nadia district. The film will depict the struggles of this legendary women Cricketer. Breaking all the Stereotypes which people think about women. This film is a dramatic retelling of several instances that shaped her life and also women’s cricket. Jhulan Goswami has also been an inspiration for many girls. She has given one scenario in which she has been scolded by many and got a such ridiculous questions. ‘Ladkiyan bhi cricket khelti hain? Beta, padhayi-likhayi bhi Karte ho kya?’(I was scolded by a lot of people. ‘Girls also play cricket? Do you even study?).”

Before Jhulan Goswami (39) carved as one of the fastest bowlers in the history of women’s cricket, she fight many small battles like misogynistic taunts from both relatives and society to make her international debut at the age of 19. She was also the former Captain of the Indian Women’s team and also got the award of Padma Shri in 2012 and also got the Arjuna Awad. 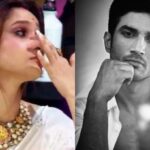 Ankita Lokhande gets emotional on the sets of DID super moms; she remebers late Sushant Singh Rajput
Leave a comment Leave a comment