The trailer shows the story of the Bhalla family kids, trying to come after the death of their mom played by Neena Gupta. The storyline is about the funeral of a mother. Her husband(Amitabh) wishes to do the funeral in a traditional manner, but his daughter(Rashmika) questions all the antique practices. Basically, its a conflict between the two generations thought. She refused to see the logic behind putting cotton in her mother`s nose, tying her toes and other things that entire family were doing.

Its a multi starrer film actors like Sunil Grover, Sahil Mehta, Abhishek Khan are also in this film that will take the audience on a rollercoaster of emotions filled with laughter, warmth and tears. The film is produced by Ektaa Kapoor`s Balaji Motion Pictures. It will release worldwide in cinemas on 7th October, 2022.

Beside this, Rashmika is also a part of Tiger Shroff`s upcoming film Screw Dheela. The film is directed by Shashank Khaitan. Meanwhile, Amitabh Bachchan will also be seen in Brahmastra which is most awaited movie of 2022. Goodbye is Rashmika Mandhana debut film in Bollywood. 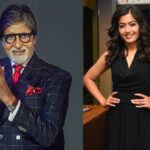 Actress Rashmika Mandhana speaks about first meeting with Amitabh Bachchan: says i thought he didn`t liked me
Leave a comment Leave a comment